Ryan Scott was in The Talk kitchen with recipes for Quinoa Salad, Thai Tuna Lettuce Wraps, and Kitchen Sink Clafoutis. Scott is the owner of Market and Rye in San Francisco, California.

Scott said that his Peanut & Sesame Dressing is the perfect thing to make when there is just a little bit of peanut butter left over in the bottom of the jar. As a shortcut to prepare the dressing, just toss all the dressing ingredients into the peanut butter jar. Then close the lid and shake it up! 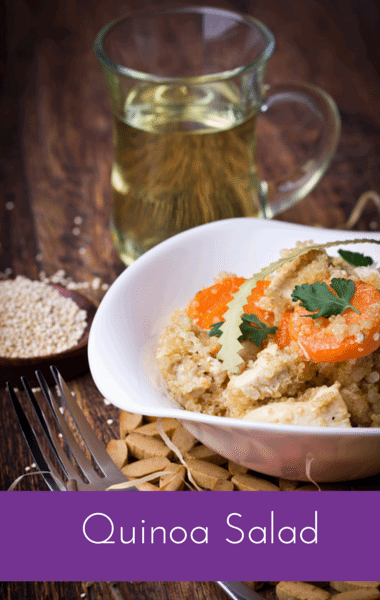 Ryan Scott explained the ultimate secret to preparing quinoa, and here’s a hint: it involves the oven! Try it when you make his Quinoa Salad Recipe. (Nikonova Margarita / Shutterstock.com)

Ryan Scott reminded everyone to dress a salad from the edges of the bowl. Then toss everything in the dressing to get an even coating. Mmm!

Scott also shared his ultimate secret for preparing quinoa at home. If you don’t like the way it gets soggy on the stovetop, there is an alternative. Toast it in an oven-safe pan (like a Dutch oven). Then add the water. Cover it with a lid and then bake it at 325 F instead, for 20-25 minutes. “It cooks evenly,” he said. “It cooks dry all the way.”